Menu
Welcome to our Community
Wanting to join the rest of our members? Feel free to sign up today.
Sign up

These are building remains from the former Gravity slope, Anthracite coal was mined here. Once a huge complex, only three buildings remain intact. (The manway entrance is still here but is sealed off to prevent anyone from entering the old mine workings) As a bonus I caught the returning train on the active remaining railroad line. This line used to service this mining operation. Across the river was another now abandoned railroad that also had a small mining operation. The old grade can still be seen at this time of year.
The now open field was the operations, but was reclaimed about 10 years ago. I do have photographs of it before it was reclaimed here: 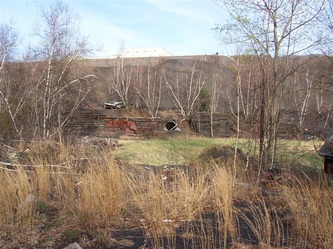 Interesting that the remains are so close to housing. Nice video.

Miners lived near where they worked. In fact many of the older homes were owned by the coal companies and the miners lived in them and paid rent. My house was originally a coal company house as it is listed on my deed.

The three buildings I took video of, the first one, "Oil House" was where oil and other liquids were stored for the mining equipment. The Shift Shanty is where the miners changed from their street clothes to their mining clothes. Since the mines were a constant 52 degrees, the clothes were insulated.

The Guibal fan house was a large paddle fan that drew air from the mines and exhausted it. You can see the large exhaust chimney in the video. This is the only intact one left standing in PA.

So does that mean that there is a lot of coal dust on the ground around the chimney? It would be interesting to see more. Thanks for sharing.

Sidd Finch said:
So does that mean that there is a lot of coal dust on the ground around the chimney? It would be interesting to see more. Thanks for sharing.

There probably was during its operation, but coal dust is light and would wash away over the years

Did some flying yesterday a bit north of where the last video was done. The abandoned buildings were once used to construct the coal cars for the railroad. You can see the massive crane remains where they would place the completed car on the track (now gone) The remaining active track that you can see some cars parked are the end of the line for the railroad I showed in the last video.

Some of the buildings further up have been refurbished and are in use by other businesses, so I didn't fly over them, only kept it to the abandoned section.