Menu
Install the app
Welcome to our Community
Wanting to join the rest of our members? Feel free to sign up today.
Sign up

You are using an out of date browser. It may not display this or other websites correctly.
You should upgrade or use an alternative browser.

I'm working to try and get OpenSFM to support the various Parrot hemispherical camera modules, like what are employed on the Bebop, Bebop 2, and Disco, so that photogrammetry suites such as OpenDroneMap can properly stitch the imagery into accurate point clouds.

With the help of the OpenDroneMap community and the OpenSFM developers, I'm already underway with getting Bebop 2 support merged into OpenSFM.

What do I need?
I need a sample dataset of at least 10 images collected in a Survey Flight Plan of some sort (grid, cross-grid, etc), so that we can try to reconstruct the data and make sure the manual Lens Calibration parameters that are derived are correct for that sensor.

So, this would be a link to your dataset containing the JPG/DNG/TIFFs from your sUAS and your permission that we can use them for the purpose outlined above.

What do you get?
If you don't use any free/open-source software that relies upon OpenSFM, then likely nothing other than my most sincere thanks and the satisfaction of knowing that you made a critical contribution to the greater FOSS Photogrammetry community by providing much-needed sample data.

If you do use things like OpenDroneMap, you gain (eventually!) the ability to process your imagery into useful data such as point clouds, DEMs, and 3D models!

What does this support mean?
It means we go from having completely broken reconstructions: 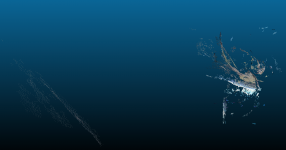 To perfectly usable and correct reconstructions!: 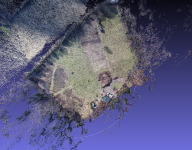 (Yes, these are the same data showing the same scenes)
A

It would be great to see the Parrot Disco being supported by OpenSFM!
I would like to help and give you some samples.

Some questions:
Do you have any prefered camera settings such as RAW or JPG?
Camera pointed straight down?

It would be great to see the Parrot Disco being supported by OpenSFM!
I would like to help and give you some samples.

Some questions:
Do you have any prefered camera settings such as RAW or JPG?
Camera pointed straight down?

Hmm... I think for now as close to stock/straight-out-of-camera as possible. If you have both RAW+JPEG, great, if not, JPEG is fine!

Whatever the normal/stock camera angle is (if there is such a thing).