Menu
Install the app
Welcome to our Community
Wanting to join the rest of our members? Feel free to sign up today.
Sign up

You are using an out of date browser. It may not display this or other websites correctly.
You should upgrade or use an alternative browser.

Which iPad for Freeflight 6 & the Skycontroller 3?

I just did a search on the forum for an answer to this, but only found some odd mentions of iPads being used, so am asking for your experiences & input.

I will be searching for either an iPad mini or an iPad Air 2 as my controller screen, using an aftermarket add-on tablet holder for the Skycontroller 3 but am not sure which way to go. My reasoning for a larger screen is that my iPhone 8 Plus is too small to see much detail very well with.It's also not the brightest of screens either, but I did find out that you can make it even brighter by going into:
Settings > General > Accessibility > Display Accommodations > Reduce White Point to 25%.

Thanks in advance for any inputs offered.

I have an iPad Pro but don’t use it for flying (its used for editing everything afterwards). But i installed the FreeFlight app just to test it out and maybe sometimes to connect to the Anafi and download some files. Anyway, the FreeFlight6 app ist not available as an iPad app. This means, as with all iOS apps, you can still download and use it on your iPad, but its essential a stretched version of the iPhone app. You can choose between original size (in which the app will only be on a centered small portion of your iPad screen) or a fullscreen stretched version.

Just to get this out of the way first in case you wonder, once you get an iPad, why the FreeFlight app looks so strange on the iPad. That being said, I would go for an GPS iPad (only the ones with a SIM card slot have that!) and because of the app being streched, I guess a iPad mini would be a good choice. Should be fairly cheap now and its screen is not to big.

Maybe also take a look at the iPad that came out in early 2018, which was the first none Pro version that had pencil support. It was sold for a pretty low price and has good hardware specs. Last time i looked, it cost the same as an iPad Mini but the Mini was not updated since a long time, so in this case picking the latest normal (not Pro) iPad may be the best choice overall, if it fits on the controller adapter.

So to sum it up:
- Look at the current standard (none Pro) iPad
- Check out the one with a SIM card slot because those are the only ones with GPS
- FreeFlight app is not optimized for iPads, so everything will be stretched.
Reactions: Krusty Geeza

Apple did a very poor job of naming their ipads. I use a 9.7 inch "2017" ipad. These were available at a reasonable cost ($279). It has no gps, so if you want range data and follow me you'll need to add a Garmin Glo ($99). Other than the Jumbo Icons, which I've gotten used to, it works great - big bright screen and plenty of processing power to run the app. It also works good on the Disco and does't need the Garmin to get range data there.
Reactions: Krusty Geeza

Thanks for your input @Seitenwerk @Skydreamer & @Chasbro , after a lot of research trying to juggle a meagre budget, weight issues, working out which models can be updated to iOS 12, have a barometer, etc... I ended up going with the iPad Air 2. I would have looked at a more recent model if I hadn't just bought new batteries for the Anafi.

Has anyone ever used one of these style holders with their Skycontroller 3? It looks robust enough & easy to attach without any modifications needed or bits intruding into the casing. Now to work out how to attach a lanyard to this all, so as to take some of the weight. 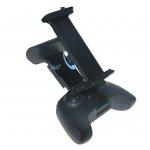 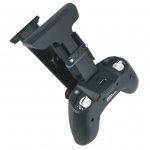 Yes, I have it and the quality is quite good.
But it is awkward to mount and to dismantle.
Reactions: Krusty Geeza