Menu
Install the app
Welcome to our Community
Wanting to join the rest of our members? Feel free to sign up today.
Sign up
You are using an out of date browser. It may not display this or other websites correctly.
You should upgrade or use an alternative browser.

My anafi engines stopped 120m up

Hi. I've over 30 flights on my Anafi. I was loving it. I use it to herd cows on the farm. My Anafi was in open space 120m up and the engine cut out. It's now in pieces. Devastated. I contacted the manufacturer and they said to send it back so they can look at it. Anyone have any idea why this might have happened.?
Thanks

no idea why but sure wasn't a battery problem as looks like it was pretty early in flight. How far out were you when it happened?

I think the battery is perfect, in fact it's the only thing still working, i was about 400m away.
I think the 24m/s is it falling from 120m up.
Just doesn't make sense.

I was under the impression that the speed on the graph was the ground speed from the GPS and did not take I to account any vertical component. If that us correct then 24m/s is either very fast or a GPS glitch.
S

I've no idea to be honest. It's all strange. Just have to see what the manufacture comes back with.
A

The speedup to twice as fast as it had gone during the rest of the flight is odd.

It’s all gonna be speculation at this point for us, even if parrot figures out exactly what went wrong, what are the odds they’d say what it was anyway? They’ll probably just replace it after confirming nothing shows user error.

Still, I like to make uneducated guesses, so here’s my thoughts:

An esc problem would cut all four motors at once, and you’d just lose altitude, not fly off at double speed.

Single motor failure and you’d probably get an error and again, falling down.

I think the ground speed is calculated from gps positions, so either

something went wrong gps wise and your drone started thinking it had jumped a lot over to the left or something, tried to correct and dropped a little altitude then error cuts the motor, or

Something went wrong with the pitch or roll sensor, or even just the calibration, and the drone started to think it was leaning when it wasn’t. Drone thinks it’s flipping, tries to correct, loses some altitude until it overcorrects and flips or just thinks it’s flipped and error, cuts power.
A

Oh, and think alt climbing/diving is included in speed, I did a flight back in dec ( testing pano feature ) that was just straight up and then back down, you can see that the speed is very strongly correlated with alt up then back down. 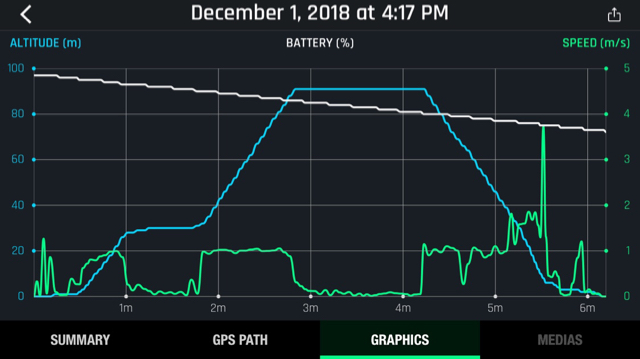 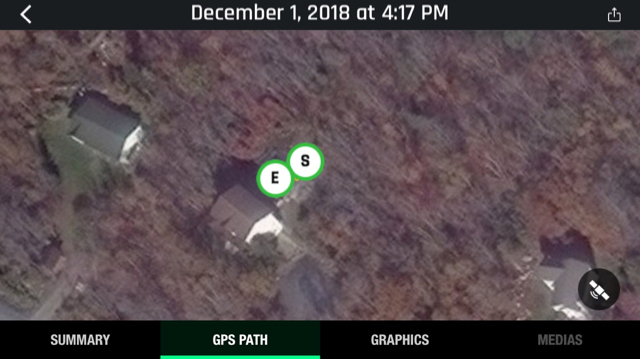 Would a bird strike cause something like this to happen? Reports of anafi's falling for no reason has me concerned as I am looking to get one for my business but multiple reports are alarming. Might be too much liability for my needs.
S

Thanks for all the replies,

Augerln, thanks for your detailed reply, I sent it back to the manufacturer today. Hopefully, they will send a replacement. Even though the Anafi is one of the quietest drones, it is still loud, so I doubt any bird would go anywhere near it. I still recommend the Anafi. Easy to fly, great camera, great zoom. If the company sends me out a replacement drone then I recommend it. But if not, then I wouldn't be so sure. I know I didn't do anything wrong, and I treated that drone like a newborn HAHAHA.
S

I received a replacement drone. Got no explanation on what had gone wrong, but at least I have a drone again. I still think the Anafi is a great drone and I would recommend. Thanks for all the help.
Reactions: Ross and Zamzara
M

Thanks for your feedback and glad you had a new bird !

Could you inform us on the calibration you did ? When was the last calibration, and the place it was performed (for example just before the flight or a few days ago, did the calibration at home or in the car or on an open field, were there electric wires in the close vincinity...)
I am more and more interested in this calibration process, though I don’t think it is related to your problem (problems do occure generally just after take-off after a ‘drift’)
Did you post also your problem in the ‘accidents file’ that is pined at the top of thie forum ?
D

Stoneageanafi said:
Thanks for all the replies,

Augerln, thanks for your detailed reply, I sent it back to the manufacturer today. Hopefully, they will send a replacement. Even though the Anafi is one of the quietest drones, it is still loud, so I doubt any bird would go anywhere near it. I still recommend the Anafi. Easy to fly, great camera, great zoom. If the company sends me out a replacement drone then I recommend it. But if not, then I wouldn't be so sure. I know I didn't do anything wrong, and I treated that drone like a newborn HAHAHA.
Click to expand...

Crows always fly around my Anafi.... so whenever I find a crow in the sky, I had to turn sport mode on.

About the engine error, it always says engine has cut out if Anafi crashes with something. It just stops working until you reset the drone even though it is ok to fly again.

B
Is their any real support for my old Anafi drone?

FlightPlan does not work anymore...

Z
Fall from sky without any apparent issue: case studies and possible reasons.

ANAFI Jan 25, 2022
Zebrauno
Z
A
Almost lost my drone because of autolanding